Lost in a very snowy Paris!

From the 5th-7th February 2018, we ran an additional workshop in Paris in response to feedback from the ESRs that they would like more experience of working with patients and medical professionals in a clinical setting.

I started to organise the event in November 2017 and, although around 3 months sounds like a long time to get all the arrangements finalised, it is amazing how quickly time flies by especially when Christmas falls in the middle of the planning!

After a very busy few months however, I found myself on the 8am Eurostar heading for Paris where I was to meet the ESRs and our partner from INSERM. Although navigating the Parisian underground proved to be a bit of a challenge due to some works which were taking place, this didn’t cause too much of a delay and I emerged from the metro station to find our hotel was indeed less than  a 2 minute walk away.

The event itself went extremely well indeed.  The ESRs undertook training workshops, listened to listen to presentations from clinical professionals working in France, and they also got the opportunity to accompany clinicians on visits to medical departments which they found to be a very moving experience (more details about the training events can be found here).

However, the weather certainly caused some unforeseen difficulties!  On the Tuesday, we were based at Gustave Roussy and to get there we had to take a trip on the underground followed by a short bus journey.  The morning’s journey passed uneventfully, however later that day Paris experienced the heaviest snowfall in 30 years.  By the afternoon many roads were closed and our bus back to the hotel had been cancelled.  I began to make my way back slightly earlier than the others and, despite excellent directions from our partner Xavier Paoletti (INSERM), I somehow managed to take the wrong exit outside of the hospital.  After walking for around 15 minutes, I saw a signpost for “le Kremin Bicêtre”, a name I recognised from the underground map.  Thinking I therefore only had a short walk to the metro station, I followed this sign which unfortunately proved to be a mistake.  A blizzard began a few minutes later and it turned out that the metro station was a significant walk away…..by the time I got back to the hotel around an hour later, I looked like a snowman!  However, on the bright side I now appear to know the suburbs of Paris quite well!

The snow continued overnight, leading to an impromtu IDEAS snowball fight on the Wednesday morning.  Although the workshop was due to run until mid-afternoon, we left at lunchtime as flights and trains across Europe were already being delayed.  I got back to Gare du Nord in time to catch the Eurostar back to the UK, however a journey which should have taken a little over two hours took nearly 4!

All in all, it was a very interesting workshop which was an extremely useful part of our ESRs’ training.  Now that I am back in my warm office with a hot cup of tea, I can even laugh about how the snowy weather caused this event to be more adventurous than was ever planned! 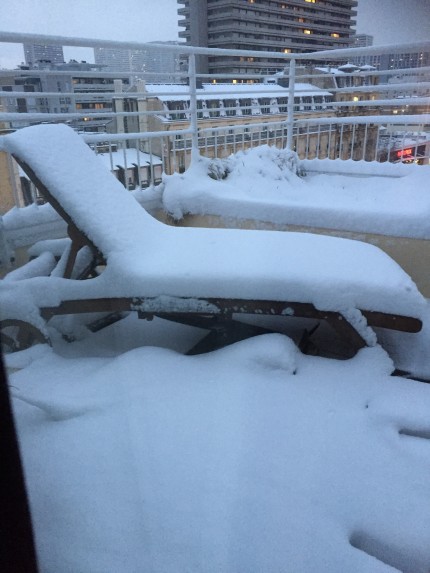 The hotel’s balcony..no sunbathing this time! 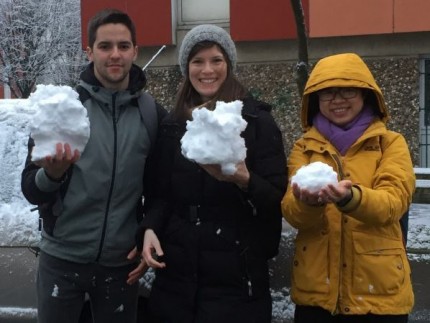 The weather gave us a good opportunity for a snowball fight!

Or copy and paste this page address:
https://www.ideas-itn.eu/lost-in-a-very-snowy-paris/