I want to first of all take us back around 9 months. I was tasked with finding a venue for a think-tank meeting that was remote and cut off from all distractions yet close enough to an airport for easy travel. Where do you start? Is it possible to get away from WiFi? It may be but that was the only box I did not tick when finding our venue in Traunkirchen.

In the lead up to the think tank meeting it was always Why Traunkirchen? Where is that? Well once you have been you will understand why anyone would travel there, set on Traunsee Lake with beautiful scenery in all directions. Nevertheless however beautiful it was we were there to work and the Symposion Hotel Post (one of only 2 hotels in the local area) provided everything we needed for such an event.

Tuesday – Travel and how the food can make an event

Ok so the time has come to depart. The journey to Traunkirchen via Frankfurt and Salzburg with my Lancaster colleagues was not as long as some of my recent journeys which was nice. Interestingly we had around 90 minutes between flights in Frankfurt which is only just enough time to get between flights (mental note take for the future). The taxi from Salzburg had free Wi-Fi which was great considering an accident left us not moving for a while. The delay was soon forgotten as we approached Traunsee Lake and the beautiful little town of Traunkirchen. 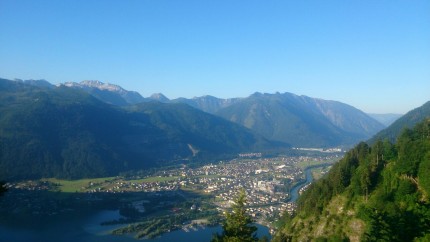 On arrival we quickly identified other supervisors and researchers that had arrived earlier and after a few informal work discussions we met for dinner that evening. Now I must admit the last time I visited Austria I was not a big fan of the local food. Well that thought has now been disproved as the local food was excellent and helped create the setting for a high spirited dinner as we all touched base again after not having been together since last October. Now I don’t want to touch on the food throughout the blog so I will say now that at no point during the next 3 days does the high standard of food slip at the hotel showing excellent variation throughout.

I have said in previous blogs but exercise is an important part of my life and fitting this in at events overseas can be difficult with late nights and early starts. Now the IDEAS group make this much easier with suggestions of running each morning as a small group. On this morning myself, Nico and Jose managed to squeeze in a 40 minute run before breakfast. I honestly do believe this is a great way to start a day before an event. It also enables you to get out and see the local area as working agendas can be quite packed.

On the first morning we had a session around secondments and helping our researchers talk about these in more detail which feedback after suggested was a very helpful session for them. This was then followed by a literature review session. Now what I should have said was a lot of these sessions were designed to be researcher led with feedback from Supervisors. It was good to see some interesting new ideas in the room rather than us providing the sessions in a format telling the researchers what they should do. 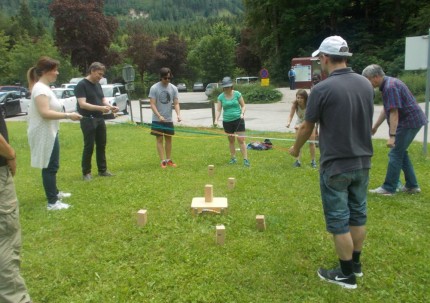 In the afternoon we organised a team building exercise based around orienteering. We had a short drive to the nearby Langbath Lake and were put into 4 groups of 8. This proved to be an excellent exercise to get us all working together following a picture map rather than a traditional one and embarking on small little set challenges on the way – not to mention the great views and the river.

It was nice to be out in the fresh air but after 4 hours it was time to make our way back to the hotel. I had an administrative board meeting for internal discussions around the IDEAS project – my chance to stand up and talk. Feedback was good; the project is on track and moving along nicely. As always actions to implement but overall there’s nothing more satisfying than hearing our partners are happy and up-to-date.

Thursday – Day 2 Someone turn down the heat

How do you start a day in Traunkirchen? Well of course the only way to do this is to wake up at 5.30am for a 6am climb up one of the nearby peaks. Now as I write this it reads like a bad idea but as you experience it, it just felt amazing. Pavel and I set off determined and were able to see some amazing views from the top and finished off with a well-deserved breakfast on our return just over 2 hours later. The walk is worthy of a blog post by itself. 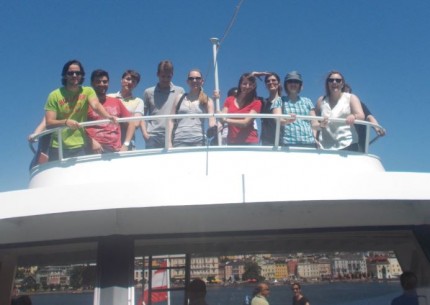 Now day 2 was the opposite of day 1 with a team building exercise in the morning. We set off to Gmunden which is at the top of the lake to visit Gmundner Kermaik. During this activity the supervisors and researchers were broken up into teams of 4/5 and tasked with painting a plate or cup that looked like a complete set. Now I must admit I happily adjudicated this rather than participate. I would be a handicap to any team unless the theme of the set was abstract art. It was nice to see such a varied approach to the themes of the pottery sets but the winner overall had a theme based around the previous days orienteering. I think we all had our hearts set on getting the boat back to Traunkirchen and for that reason had a very quick walk to the dock – despite the heat.

In advance of the think-tank we asked the researchers to design their own session and this was on the afternoon of day 2. The session was a mixture of presentations and poster pitches depending on which one was most useful for the researchers. This was probably one of the toughest sessions for all participants with a very hot conference room. Half way through I made the decision to change rooms which I think in the end helped raise energy levels again. This session proved useful for our researchers as it was designed to be a critique exercise. I hope they managed to take some good learnings from the advice given by our other delegates.

Dinner was set up for us outside that evening which was a nice relief after a challenging afternoon. Needless to say the hotel shined again by raising spirits and energy levels with another great dinner. It was also nice to see the tables start to mix up with supervisors and researchers.

Friday – Day 3 Map out, disseminate and then time to say goodbyes

No runs, no climbs just a leisurely wake up today with it being the final day. Bags packed in advance and checked out before the morning session began. The first session of the day was a mapping exercise to see if there are possible synergies between projects that we may have missed. This was a session I learned from an old colleague to draw out new ideas and links but the first time I had ran it without him so it was good to see it was useful on this occasion. The final two sessions of the day were based around careers and outreach activities. These sessions enabled us to have some outputs to progress with after the think tank and this also brought the think tank to an end.

Of course as always there are things we can improve on. We shall take some important learnings from this event to push forward with future events but I think we have set a high standard now for these future events

Thank you to all those attended and to those who helped bring this together. It was great to catch up with our partner supervisors and researchers. This really is such a strong community.

See you in Lancaster in September

Or copy and paste this page address:
https://www.ideas-itn.eu/ideas-think-tank-in-traunkirchen-austria-by-allan-gordon/